Is My Toddler in The Right Daycare? 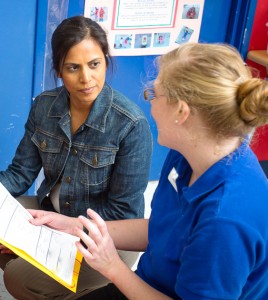 When my first child started daycare, I made the same rookie mistake many new parents make – I didn’t ask any questions. I felt embarrassed – that somehow, asking questions made me look dumb. Four kids and several daycares later, I now know what I wish I’d known then – there’s no such thing as a dumb question, especially when it comes to settling your toddler into the right daycare.

Knowing your child is in the right daycare isn’t a one-step decision – it’s an issue that needs to be considered on an ongoing basis. Little kids grow quickly, and their needs and preferences change just as fast. That’s why it’s so important to have an ongoing conversation with the most important ally in your child’s development – his or her teacher.

Added to the problem is the fact that your young child isn’t exactly the most reliable reporter on how school is going. For instance, two-year-old Matthew recently complained, “Me no like school. No more school.” What should his mom, Maria, do? Worry that his teacher is neglecting him? Keep him home for a while? Hope he grows out of it? Transfer him to another daycare?

I gave Maria some tips, and here’s what she did:

I also showed Maria some of my other tips about making school a successful experience. Here’s some information about a common cause of crabbiness among young children, and here are my suggestions for building a great relationship with your child’s teacher from the start.

How to Talk to Your Child About Difficult Situations

The way we, as parents and caregivers, respond to children’s questions and worries will help them through difficult times and teach them to cope during future challenges.  We wanted to provide you with information to help you recognize signs of stress in children and offer you suggestions for helping children manage stress.
February 6th, 2020

No matter the weather, there are many benefits to letting kids play outside! Here are just a few reasons why.
August 7th, 2019