How To Talk About Diversity With Young Children 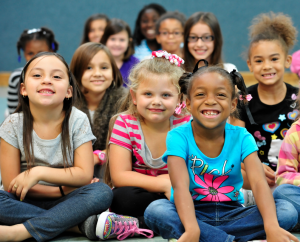 If you’re like me, you want your children to grow up to be kind. To have the morality to know that everyone should be treated equally. That skin color, gender, religion, ability, or any other form of difference should be not only tolerated, but embraced.

But if you’re like me, you might also have made this mistake: To assume that simply exposing our children to differences means they’ll accept those differences. That if we live in integrated neighborhoods, or send them to schools with diverse students, that will be enough. They’ll be “color blind,” and see past differences.

It turns out that we need to be more proactive. Research finds that even tiny babies – as young as six months old – recognize racial differences in people. And guess what? They instinctively prefer people who are the same race as their own family. Little babies are hardwired to discriminate. And past a certain age, simply putting different kids together only ensures they’ll self-segregate into their own cliques.

But don’t get too discouraged. Because studies also show babies are born to be caring, generous, and fair. They instinctively want to help good people, and to punish bad people. But how can we be born both prejudiced AND concerned about fairness?

Here’s how I make sense of those seemingly contradictory findings. We’re born with the seeds of both prejudice AND altruism. Basic survival demands that we protect “our own” – those like us. But higher-level thinking – including altruism, kindness, and other wonderful character traits – can be nurtured as well.

As parents, we have the important opportunity to push our children in the direction of acceptance and tolerance – or fear and discrimination.

To raise accepting, tolerant kids, start talking about differences. Don’t be embarrassed to address them. Children notice differences in skin color, gender, abilities – the whole range. Don’t pretend they don’t exist. DO explain that everyone should be treated equally – and fairly – no matter their differences. But start now because, by third grade, it seems the foundation of these character traits is fairly set.

Start with gender differences. Parents seem most comfortable addressing the fact that girls and boys are different. But girls can play with trucks – and grow up to be firefighters – if they want. Then expand the topic to include those of other colors, abilities, and backgrounds. It helps to talk about your family’s own history, and instill a sense of pride in your culture and traditions. And mostly, be a good role model by having all sorts of folks in your family’s circle of friends.

How do you promote diversity in your family? Please share!

How soon is too soon to learn about collaboration?  Most babies get their first inkling of teamwork by the time they’re 6 months old, old enough to enjoy a rousing exchange of peek-a-boo. “From our earliest years, collaboration builds our critical thinking capabilities and introduces us to different ways of solving a problem as we […]

These Fantastic Firsts aren’t what you’re expecting. Sure, walking, talking, potty training, and the other usual milestones are impressive. But developmental experts really get excited about these lesser-known gems that display even more complex leaps in development:  First “Conversation” (3-6 months): Those lovely back-and-forth exchanges of “oohs,” “aahs,” and sweet glances prove that your baby […]